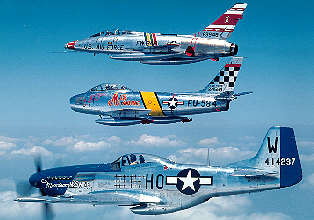 Obviously, for the display phase, I cannot look at my knee-pad guide.  All your time needs to be spent looking out of the cockpit, checking for the biggest safety hazard - the ground!  With this in mind displaying multiple aircraft requires a sensible, safe attitude towards what you are going to do in front of the public.  The driving factors to remember are that the public have paid to see the aircraft and not you as an individual' they like to take pictures of it, from as many different angles as possible, and they like the noise of the engine (particularly if it's a Merlin).  The manœuvres that you fly are, to some extent, superfluous to their enjoyment.  As a macho, punchy display pilot this is very difficult to come to terms with!

At all times I keep the display simple, with manœuvres put together in a flowing fashion.  I try to remain around 100-150 feet above the ground on my 'low' flypasts to ensure all the crowd gets a good view of the aircraft.  Similarly, I try to limit the 'g' that is used by slowing the aircraft to perform a smaller radius turn rather than staying at high speed and pulling more 'g' to produce the same effect.  Coming in towards the crowd from different angles, also gives the impression of a more varied show.

Increasing The Safety Margin  (back to top)

When only a single aircraft is displayed all season it is easier to build up a good understanding of the aircraft's characteristics and the 'gate' parameters (entry speed, height and speed over the 'top', etc) required for individual manœuvres.  Unfortunately, this is not the case when displaying several aircraft and there is always the danger of using the wrong gate value with dire consequences.  This leads me on to the manœuvres I will and will not perform.  There are certain manœuvres that need the 'numbers' to be right to have a reasonable safety margin; for my capability these include loops, level slow rolls and barrel rolls performed level.  Bearing in mind what the majority of the public want from the display, I have made the decision not to include these manœuvres in my displays.  I will perform looping-like manœuvres, for example half cubans (three quarters of a loop followed by a 180-degree roll to the right way up) and I will perform slow rolls and barrel rolls but only with a slight climb.  I try to use only manœuvres that have an upward vector for the 'exciting' bit and when I am coming back down towards the ground I am just repositioning and gaining speed for the next manœuvre.

With this type of approach you are maximizing you room for error and minimizing the effect of not getting it 'quite' right, as any errors in technique will be going up and not performed on the way down.  (The public might not even notice the technique error.)  A secondary benefit is that only one speed needs to be known for each aircraft - the speed needed to perform a vertical manœuvre.  Even then if the speed is below this it just means that you cannot perform a pure vertical manœuvre (half Cuban, say) but you will still be able to perform an oblique manœuvre, which will not look out of place.

Staying In Sight  (back to top)

Another technique I use for all aircraft is to start my show high speed (to let the public see the aircraft's full speed envelope) but then quickly work the speed down to the 'best' turning speed for the aircraft.  In a display context this means minimum radius of turn.  This approach serves two purposes, it keeps the aircraft close to the crowd, thereby giving them many photo opportunities and, more importantly, it reduces the 'g' loading on the aircraft.  This preserves these older aircraft and reduces the stresses on the pilot, all, hopefully, increasing the safety margin.  You will find that a flowing, close display will be received better than a fully aerobatic display that needs the pilot to be almost out of sight for a lot of the time regaining energy for the next loop!

EMERGENCY PROCEDURES  (back to top)

An emergency in a display routine is usually over very quickly (because of the proximity of the ground) and is normally the last thing you think will happen.  It is therefore very important to know the 'immediate' actions required.  This is potentially a problem when displaying multiple aircraft.  However, if you consider the limited time available and the proximity of the airfield, only the first few items of any drill can be accomplished and these are very similar for the various classes of aircraft (single propeller, multi-engine and single jet aircraft).  In an emergency if the aircraft only has one engine then the critical pieces of information are the glide speed and do I have the option to eject or not?  If time permitted I would then perform fuel, propeller and battery actions, followed by a Mayday call.  In a multi-engine aircraft emergency the correct 'speed-to-fly' problem is more complex.

Understanding Safety Speed  (back to top)

With multi-engine aircraft the important piece of information, in an emergency, is the 'full-power' single-engine 'safety' speed and, perhaps more importantly, what it means.  The 'safety' speed given in an Aircraft Flight Manual is the minimum speed at which the multi-engine aircraft is controllable with full power selected on one engine and the other engine failed.  In effect it is the speed at which the force being created by the live engine can be balanced by the opposite force produced by the rudder (a function of speed times size of the rudder - basic explanation only, for the purists!).  It therefore follows that if the engine is at less than full power the rudder will need to produce less force to balance the engine thrust.  As the rudder size does not change it means that the reduction in the rudder force can be produced by reducing the speed.  (Lower speed times same rudder size balances the lower thrust from the live engine.)  This understanding is vitally important during multi-engine emergency handling and it basically means that you do not always need to achieve the 'book' safety speed in an emergency; conversely if you are at a speed below safety speed when the engine fails (or one engine 'picks up' slowly) you may have to reduce power to maintain control, then fly the aircraft out of trouble, only adding more power when more speed can be safely obtained.

As for the way I display multi-engine types I have tried to increase my margin for error by not deliberately flying below the 'full-power' safety speed;  however, if the emergency dictates I can fly at lower speeds, but I will have to reduce the power on the 'live' engine to maintain safe control.  Should that control at any time be in doubt the golden rule is to close both throttles and land straight ahead (or eject) if there is not enough height to recover control and gently reapply power to climb away.

Make The Correct Decision  (back to top)

In all cases flying the aircraft comes first, followed by performing as many of the emergency drills that the time allows for.  However, there is one decision that must always be made in good time if things are going wrong - do I eject, do I need to close both throttles, do I go for the runway or do I put it in a field?  It is this decision that might save your life and it is worth remembering that the aircraft could probably be replaced or rebuilt - you can't (normally)!

DISPLAYING THE AIRCRAFT  (back to top)

As described above I have a bucket of preferred manœuvres that I build my display sequence from, depending upon the aircraft type, how current I am, the weather and the display venue;  however, I do try to exploit any of the aircraft's good qualities.  For example, the Canberra can come in at 450 knots to open the display, but can also turn on a 'sixpence' at 200 knots.  It also has bags of power for steep climb-aways and a big bomb bay, which is an unusual feature.  In comparison the Hunter looks and sounds great when it is 'high' speed.  It can open the show at 600 knots, but again it has to be slowed to around 300 knots (with a bit of flap) to turn well.  So the display is a compromise between being 'tight' and keeping the show flowing, with as much high speed as possible between the turning manœuvres.  The Meteor is fully aerobatic, which is unusual for twin engine aircraft nowadays, particularly the jets.  I therefore display it in a similar way to the Canberra but throw in a cuban and a roll to show off its extra capability.  For a Spitfire all you really need to do is stay on the ground and rev the engine - what a noise!  A slightly more adventurous show would include lots of profile shots to show off the elegant lines of the elliptical wing.  In contrast the Avenger is a big propeller aircraft that starts up in a cloud of smoke and needs to be displayed in a similar way to the Canberra.  The nice thing about the bigger aircraft is that they always look closer and lower than they really are.  For the slower vintage aircraft like the Messenger the features to exploit are their slow speed and very small radius, turning manœuvres.  A slow pass in the Messenger is very slow, and quite impressive in its own right.

THE FINAL WORD - IS ALWAYS SAFETY  (back to top)

If you can exploit the aircraft's better qualities, while flying the manœuvres from your repertoire that you are happy with and have practised many times before, you have reached the first base when it comes to displaying several different types of aircraft.  Add to this a professional approach, a tried and trusted method, a few 'golden' rules, some guidance from others and some experience and you are working towards increasing the safety factor.  Finally, you need to make an honest and educated assessment of your ability, based on all of the above, and then you should fly using only 80 per cent of this perceived ability.  This leaves the extra 20 per cent to give you yet more margin for error - for the error will inevitably come even with the best display pilot in the world.  The ultimate aim of all display pilots, using whatever methods they prefer, is to try and make that error survivable!

My thanks to all those people that have imparted knowledge and restraint upon my display flying career, particularly Tony Haig-Thomas, Brian Henwood and my patient family.