A RARE PIECE OF HISTORY 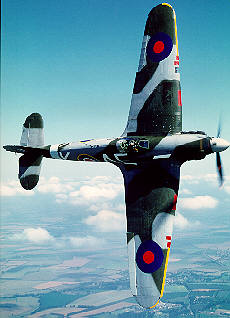 The Warbird scene is an ever changing and exciting world made even more so by the resoration of rare aircraft with bags of nostalgia.  One such aircraft is Hurricane, G-HURR: it is one of only six airworthy Hurricanes in the world.  The aircraft first took to the skies after restoration on 14 January 1996.  At the controls was Dave Mackay, a very experienced and capable warbird pilot.  He completed the majority of the initial test flying from Blackbushe before the aircraft was moved to its present home at Farnborough.  During the test programme there were only minor problems to be sorted and a full Permit-to-Fly was issued in July.  Early on Dave Mackay wrote an excellent article about his experiences during the initial flying phase and the enjoyment he has had with the aircraft.  However, it is now a year on since the initial Permit issue and this article attempts to expand a little on the history of the type and the actual aircraft with just a few of the flying delights thrown in for good measure.

HISTORY  (back to top)

The Hawker Hurricane was developed in the 1930s and the prototype made its first flight in November 1935 from Brooklands.  The RAF originally ordered 600 aircraft the first of which entered Service late in 1937 and by the end of 1938 some 200 had been delivered.  A rather different time-scale than the many years it takes for a modern jet fighter to progress into Service from its first flight!

Hawkers expanded production with the opening of a new factory at Langley, Bucks and in 1939, as production levels increased again in response to the tension in Europe, the Canadian Car and Foundry Company were licensed to manufacture the aircraft.  The first Canadian produced Hurricane flew in 1939 and was powered by a Rolls Royce Merlin III; however, later aircraft, commencing with the Hurricane X (the 'X' denoting Canadian production), were powered by Packard Merlin engines.  By 1941 ten aircraft per week were arriving from Canada.  These were valuable additions to the twelve aircraft a day being produced by the four UK factories (Kingston, Brooklands, Langley and Hucclecote).

The Hawker Hurricane came of age during the Battle of Britain where it secured its place in history.  During the Battle the average number of Hurricanes in the RAF was 1326 compared with 957 Spitfires.  At the time the Hurricane I was the only version of the type in operational use, and its eight rifle-calibre Browning machine guns were enough to wreak destruction among the opposing German formations.  However, it was obvious that heavier fire-power would be required as the war progressed.  The installation of a twelve Browning gun fit was made possible by the arrival of the Rolls Royce Merlin XX which boasted 1260 horsepower.  It was with this powerplant that the Hurricane II was borne.  Deliveries began on 4 September 1940.  The first 120 of these, known as the Hurricane IIA Series 1, had the original wings, carrying eight machine guns.  The Hurricane IIA Series 2 was used to develop the twelve-gun wing which eventually was fitted to the Hurricane IIB.  The twelve-gun Hurricane also had attachment points for underwing external tanks or bombs.  Later Marks of the Hurricane included the Hurricane IIC which was fitted with four 20 mm Hispano guns and first reached the squadrons in June 1941.  The Hurricane IID was a tank-destroyer variant which was armed with two 40 mm Vickers Type S anti-tank guns.  It first saw action during the Battle of Bir Hakim in 1942 and went on to destroy much enemy armour in the Western Desert and in Burma.  Various camera equipped versions were developed from 1941 onwards including the unarmed Hurricane PR II.

Of the 12 979 Hurricanes of all Marks that were built in Britain, 8436 were Mark II variants; of the 1451 Canadian-built aircraft, 1037 were derivatives of the Mark II.  The Hurricane II was not only the most numerous Mark but also bore the brunt of the Hurricane operations during WWII.

THE ORIGINAL HURRICANE  (back to top)

The Hurricane II was a single-seat, low-wing, cantilever land monoplane with retractable main wheel units and an enclosed cockpit.  It was powered by a Merlin XX engine fitted with a right-hand tractor propeller of the Rotal or DH variable-pitch type with constant-speed control.  The main dimensions were: span 40 ft, length 32 ft 3 in and height 8 ft 9 in.

The fuselage can be divided into the following four portions: engine mountings, centre fuselage, rear fuselage and tail bay, the longerons being discontinuous at the joints between these portions.  The main members of the fuselage are of steel and duralumin (light alloy) tubes; most of the top, bottom and cross panels are braced with swaged steel wires, the side panels being tubular braced.  No welding is employed in the structure, the ends of the tubes being rolled to rectangular sections and bolted or riveted between steel side plates.  The rectangular sections are a marked difference from the Spitfire construction and are one of the more difficult items to reproduce well.  The engine and front fuselage are covered with light-alloy panels, the decking with fabric-covered plywood and the rear fuselage with fabric on wood formers and stringers.

The cantilever wing is built in three sections: port and starboard outer planes and a centre section which is integral with the fuselage and faired into it.  The underside of the centre section is flush with the bottom of the fuselage.  The outer planes of the wing are of 'stressed-skin' design to give them their strength yet light weight.  The fabric-covered mass-balance ailerons have a differential action and hydraulically-operated spilt flaps are fitted to the trailing edges of the outer and centre wing sections.  The flaps extend between the inner ends of the ailerons except at the position of the radiator fairing.  The tail unit components are of all metal construction and are fabric covered.  The non-adjustable cantilever tail plane is attached to the top rear of the fuselage; pitch trim is obtained by elevator tabs which are adjusted from within the cockpit.  The rudder has a small horn balance, which houses the mass-balanced weight, and is fitted with a tab controllable from the cockpit.  The fin is offset to counteract engine and propeller torque.

The main wheel units consist of two oleo-pneumatic shock-absorber struts which retract inwards and backwards into a well between the centre-section spars; the unit is hydraulically operated and fitted with mechanical locking and electrical indicating devices.  Each shock-absorber strut carries a stub axle with a medium-pressure pneumatic wheel fitted with a pneumatically-operated brake controlled by a lever on the control column.  Nose-wheel steering is provided by differential action of the brakes by use of the rudder bar and the brake lever.  On the ground the tail is supported by a non-retractable shock-absorber strut which carries a fully-castering and self-centring wheel.

The main fuel tanks are housed within the centre section between the spars, one on each side of the fuselage (33 gallons each); a reserve tank (28 gallons) is fitted between the firewall and the instrument panel.  The oil tank forms the port leading edge of the centre section and holds 10.5 gallons with 9 gallons being usable.  A combined oil and coolant radiator is hung beneath the fuselage behind the main-wheels and is contained in a low-velocity cowling duct, which has a flap shutter hand-operated from the cockpit.  The cockpit is indirectly heated by this radiator assembly.